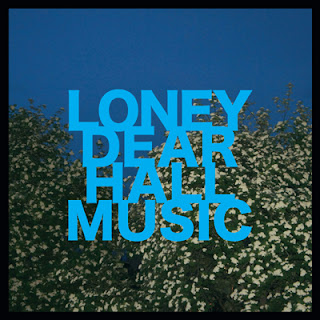 Loney Dear's path to the creation of their new album Hall Music has been an interesting one. After returning home from touring the United States Loney Dear's Emil Svanangen began to play shows with chamber orchestras throughout his homeland. The experience was an important moment in the career of Loney Dear as it pointed him/them in the direction that eventually led to the recording of the appropriately titled Hall Music.

Intimate and yet expansive, Hall Music's quiet sounds almost sound symphonic in their approach. Slowly building in structure, the songs develop their power as the songs progress...it's almost as if each song is a movement in a bigger piece. While still retaining enough of a pop sensibility about them, the songs that make up Hall Music are lushly crafted with airy guitars, wispy vocals, and an ethereal arctic feel to them; it is as if they were echoing down the hallway of life and just happened to find you in their way.

Hall Music is angelic stuff that's delicate and barely there. It's as if Emil has constructed a record that's the soundtrack of big open rooms with nothing in them. That quiet sense of expansive spaces is what this record is all about. And yet, despite that scale, Loney Dear seem so unobtrusive in their approach that if you're not careful you will have listened to them and never have known it (almost like they were hidden in that big empty room tucked in a closet). If that were to happen that would be unfortunate as Hall Music is a beautiful record that should be listened to in a room of any size.
Posted by Paul POP! at 6:42 PM