Moholy-Nagy & The Drift Go On Forever 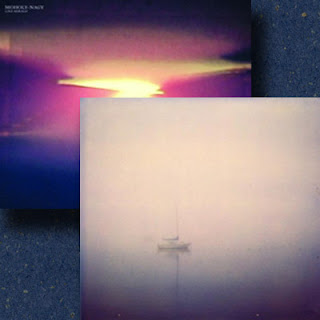 Temporary Residence are legendary for producing some of the most beautiful, tranquil, loud, and noisy post rock on the planet. The two latest artists to emerge from the Temporary Residence stable are Moholy-Nagy and The Drift. Their respective brands of post rock are simply stunning, imaginative and so well put together Brian Eno would blush. Both Moholy-Nagy's Like Mirage and The Drift's Blue Hour are atmospheric masterpieces that waft in and out like a gentle breeze with their epic soundscapes creating endless vistas for your imagination to play in.

Consisting of two power trios the bands both make far more music that three musicians should physically be able to and how they do it all is either studio wizardry or musical magic. With all sorts of effects, drones, tones, sustained notes and ethereal guitar riffs the songs that both artists create are awe inspiring and heavenly. While The Drift's Blue Hour is a bit more rock oriented, and a bit noisier than Moholy-Nagy's album both are instrumental works of art.

Moholy-Nagy's Like Mirage is just as the album title suggests an ethereal oasis in a sea of noise. With ambient guitars, gently pinged pianos, slowly moving basslines, and analogue synths the band create the soundtrack of the vastness of the universe slowly moving to its own drum. Like Mirage is lush, epic, and so widescreen it's beyond HD and that's what makes this record seemingly stretch into eternity. Absolutely beautiful, Moholy-Nagy's Like Mirage, is a free flowing dream that you'll never want to end.

On the other end of the instrumental spectrum, The Drift, take things in a bit more rock direction creating throbbing rhythms and pulsating riffs that seem to launch themselves in space. No less imaginative and atmospheric, The Drift creates their never ending landscapes manually in a rock and roll format. Guitars drone on and on, drums collide into driving bass lines and there's enough distortion and controlled chaos to make you feel like you’re in a post-apocalyptic world about to implode. While Moholy-Nagy tends to be laid back, The Drift is tense and terse in their atmospheric pursuits. I suppose it's all in the name...their songs are cast adrift in the rough seas of post rock and left to their own devices. It makes sense then that Blue Hour is a swirling storm of sound that envelopes the listener in all sorts of analogue chaos.

Separately both bands are amazing, together listened back to back they are unearthly. Both albums, Blue Hour and Like Mirage, are amazing records that take post rock to the outer reaches of the galaxy and beyond. Both are instrumental masterpieces from fantastic bands and from a label that has a track record of issuing tons of such works.
Posted by Paul POP! at 6:01 PM

Email ThisBlogThis!Share to TwitterShare to FacebookShare to Pinterest
Labels: Moholy-Nagy, the drift