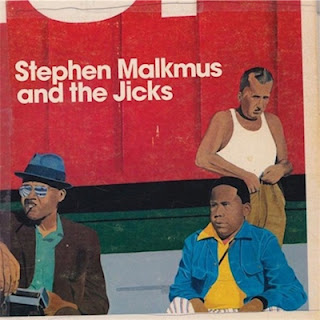 Stephen Malkmus is a bit of a legend...from Pavement to his solo career his status as the king of slacker indie has made him nearly saint-like. Thankfully, he's always had the tunes to back up his claim to the throne and his latest album, Mirror Traffic, only solidifies that claim. Truly an awesome record of lazy, unmotivated indie rock Mirror Traffic sees Malkmus and his Jicks almost sound like Pavement at their nearly unconscious best.

Mirror Traffic is a lackadaisical pop record that kind of floats through the course of the fifteen songs only occasionally lifting a finger of energy to turn the odd quick paced riff. Rather than expending loads of energy it seems as if the band recorded most of Mirror Traffic while either on vacation in a pool or in bed at home. There are some exceptions, "Spazz," for example is exactly as its name implies and is a frenetic work out of broken guitar strings and screamy vocals. For the most part though, much of Mirror Traffic sounds like my early mornings that is as if they were my personal alarm clock.

After all these years it's nice to know that Mr. Malkmus can still write great songs and that he together with the Jicks can create classic albums with such lackadaisical effort. Mirror Traffic is another great record in the long line of great records that he and his bands have created. Where it stacks up to past efforts is a judgment that must be made on a personal basis, but it deserves to be somewhere near the top if you ask me.
Posted by Paul POP! at 4:59 PM