Alan Lomax Heads To The Hills 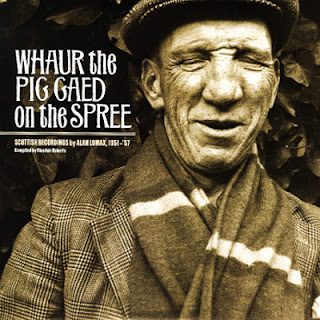 Tradition. It's all about tradition with Alan Lomax & Alasdair Roberts. In 1951 Alan Lomax made his first trip to the Scottish Lowlands and recorded traditional Scottish folk music that included the ballads from farm laborers, fishwives, and Scottish Traveling folk. For the next six years, Lomax continued to record these songs. But until this year, these recordings were never heard on record. Now thanks to guidance of Alasdair Roberts and the Alan Lomax Archive Global Jukebox Label, Lomax's recordings can now be heard by all on compact disc and mp3 under the name of Whaur the Pig Gaed on the Spree.

Un-produced, raw, and so sincere you can hear the spirit in every song, Whaur the Pig Gaed on the Spree is the sound of the Scottish Lowlands brought to life. Much of Whaur the Pig Gaed on the Spree sounds nearly ancient and you can feel the age of each of these songs as they've been passed on from generation to generation. There's history, tradition, and stories to each of the verses here and that's what makes this album so amazing; to hear these tales sung with all the heartbreak, hilarity, and heart in tact is stunning.

While most people will think of bagpipes when they think of Scottish folk music, Whaur the Pig Gaed on the Spree illustrates quite clearly that there's so much more to this musical form. With barely any instrumentation at all the singers and artists who appear on this album will keep you gripped by their tales, songs, and voices. It's wondrous and beautiful stuff that makes me miss Dundee, Stirling, Edinburgh, and Glasgow immensely. Bonnie Scotland is honored to the highest order on Whaur the Pig Gaed on the Spree and it's something to behold and sit with a bottle of whiskey and enjoy.
Posted by Paul POP! at 4:11 PM