The Bodies Obtained Are Lower Than My Hand Will Go 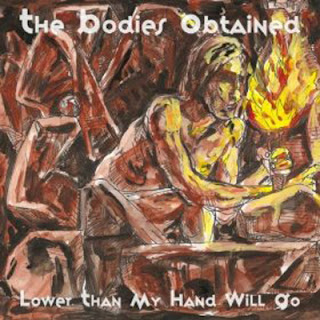 It's hard to believe that The Bodies Obtained are on the fifth album already. Wow...that's scary but not quite as scary as their latest album Lower Than My Hand Will Go. This chaotic, noisy synth punk record is the sound of the early 80's beaten up with a mallet and the recorded for prosperity. Imagine Suicide in a knife fight with The Residents and you can kind of get a feel of where these guys are coming from.

This is synth punk and it's violent, random, and about as unmusical as it sounds. This of course makes Lower Than My Hand Will Go a fascinating record. The sheer difficulty of listening to the choppy rhythms, broken 80's synths, half developed ideas, weird song structures, and general disorder make getting through Lower Than My Hand Will Go a challenge. The whole thing reminds me of this sort of gothic synthetic theatrical event with a broken calliope attacking it's audience between the ears. It's strange and unlike anything you've heard. I'm pretty sure, in fact, it's the weirdest record I'll hear all year and I'm not quite sure whether or not I actually like it.

Lower Than My Hand Will Go is bizarre, dissonant, over the top and barely musical. Lower Than My Hand Will Go is the kind of record that befuddles, amazes, questions, and challenges. Is it music? Is it theater gone wrong? Is it listenable? It's worth a listen to try and figure those answers out and for the sheer craziness that's contained within but not really much more. In the end I was more intrigued by The Bodies Obtained and what they do than a fan of it.
Posted by Paul POP! at 4:57 AM No comments:

Email ThisBlogThis!Share to TwitterShare to FacebookShare to Pinterest
Labels: the bodies obtained 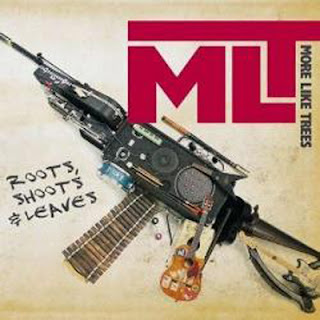 British band More Like Trees are an interesting lot. Bursting out of the very competitive London music scene the band have only been together for two years and in that short time have made quite the name for themselves. Why? Well this three piece group do something very few groups manage to do...rock the heck out on acoustic instruments. Yeah, you read that right...these guys kill it on acoustic guitars.

Their album Roots, Shoots, and Leaves is an impressive effort that's so far away from what your thinking it's not even fair to think of it. The band and this record is beyond energetic and packed with sweeping drama and an almost mariachi like feel to it. It's quite jaw dropping when you think that all this ruckus is done with acoustic guitars and not much more. The band are exceptional musicians and their ability to strum the devil out of their instruments while playing like mad men is truly impressive. I don't know how many sets of strings these guys go through but I'm willing to be it's more than a few.

They might label themselves as strum and bass but Roots, Shoots, and Leaves sounds like a cross between The Coral and the Arctic Monkeys on a bit of a trip. I'm not really sure how else to describe these guys except to say that it's all slightly psychedelic with reggae, folk, flamenco and indie influences all crashing headlong into each other. I thoroughly enjoyed their approach and their ability to write songs that are emotional and kinetic is just awesome. Throw in their rather impressive cover of Intastella's hit, "The Night," and you have a record that touches on Britpop and coffee house cool all in one sweeping motion. They might only have acoustic guitars and might strum said guitars but this is one group who are seemingly mad fer it!

Roots, Shoots, and Leaves is an impressive effort that kicks the entire acoustic music genre in the butt and turns it upside down. This is what "folk" music should sound like. It's emotional but it has energy. It's thoughtful but has a sense of fun about it. It's music you want to listen to again and for a bunch of guys with acoustic guitars to do something like that is surely a sign of the apocalypse.
Posted by Paul POP! at 4:51 AM No comments: