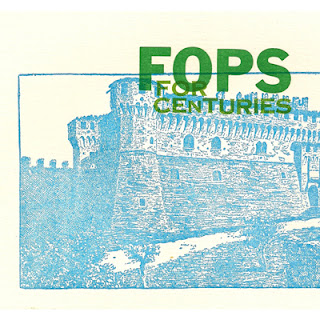 FOPS is a band that have clearly been buried in their old collection of 4ad, Cherry Red, and Blanco y Negro Records a bit longer than is recommended. Their album For Centuries is a strange amalgamation of gothy overtones, distorted melodies, found sounds, and classic 80's disturbo pop. Sounding like some X-Mal Deutschland lost in the netherworld, the band seem to be disembodied musicians wondering the 9th plane of hell. For Centuries is so disturbed it might scare the living heck out of you simply because living musicians couldn't make music like this if they tried.

Jumping between strange nearly atonal synth pop, guitar wipe outs of the broken kind, and pseudo-hooks buried in places you would never think to look, For Centuries hypnotizes you like a vampiric musical entity granting you eternal life in exchange for devotion to it's strange left-field Armageddon pop. This is the sound of foggy landscapes and cloudy mornings of Halloween's that never end (just listen to the 20 minute "Ronald Wilson Regan," for an example of this). For Centuries is a great listen simply because of how darkly disturbing this record really is while somehow maintaining a small respectable amount of pop sensibility that if you can find you can latch on to.

This is not your typical goth record nor is it your bog standard art pop recrod, instead FOPS have created a cross genre monster that lurks in the shadows hoping to possess unsuspecting listeners. Once FOPS has you, they've won because For Centuries will cast its dark charms over you in a swirly, noisy, and riveting blast of pop that's not been heard since Xmal Deutchland walked the earth.
Posted by Paul POP! at 2:24 PM

Email ThisBlogThis!Share to TwitterShare to FacebookShare to Pinterest
Labels: fops