Cas Haley Has Gifts To Give 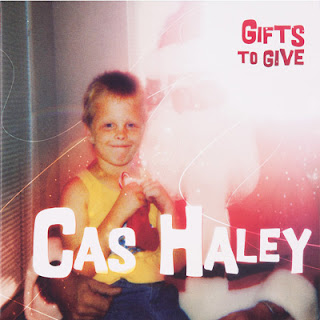 Cas Haley's Gifts to Give EP is a cool take on the traditional Christmas album. Taking the singer-songwriter template and adding a bit of Texas swing and oddly enough, reggae to the mix, Haley comes up with something that makes Christmas music fun. Featuring one original song and four classic tunes, the Gifts To Give EP is a quirky Christmas record that's great stuff.

His original song, "Gifts to Give," is a heartfelt Christmas song that's laidback and perfect for dancing. A cool ditty, Haley has done a good job of adding to the lexicon. His versions of "Have Yourself A Merry Little Christmas," "Let It Snow," "Rudolph," and "The Christmas Song," are all very good and his unusual vocal style makes the songs stand out. I quite liked the jazzy feel of, "Let it Snow."

Christmas albums are a dime a dozen this time of year and you really have to do something different to make an impression. Cas Haley does that. His jazzy style influenced by folk, reggae, and Texas swing really makes the songs fun to listen to and his ability to get in touch with his inner Bing Crosby doesn't hurt either. Merry Christmas everyone! You can pick up the record at www.cashaley.net
Posted by Paul POP! at 3:57 PM