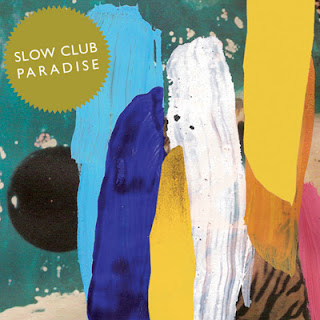 It's been a long time coming but Slow Club have finally have released their sophomore album and it's a doozy. I suspect when you have a name like Slow Club, you kind of set yourself for un-speedy production and album release dates. Release dates, studio time, and procrastination aside, Paradise, is a stunningly brilliant record from this British duo that picks up where their last album left off and runs with it.

Paradise is a swoonsome, gorgeous record that finds melodies in emotions, doo wop, and noise pop. Slightly lo-fi at times and slightly lost in the 50's at others, the album is an amalgamation of pop music highlights that when strung together make for fantastic indie pop that's catchy, upbeat, and just plain fun to listen to. This is a band that refuses to limit itself to sounding like there are just two members in the band. Oh no, Slow Club make Paradise sound as if there were eight other members in the group who all make a racket at the same time in a pleasing way; it's a surprisingly diverse record despite the membership consisting of a drummer and guitarist.

With old-ish feeling ballads getting cozy to driving pop songs, Paradise keeps you gripped with fabulous vocals, catchy choruses, and the British style of self-deprecating humour. It's a slightly dark record that touches on mortality despite hinting of paradise and wanting to go there. Slow Club do a great job here of taking moments of emotional trauma and making them sound fun; a pretty admirable ability that I wouldn’t mind having. Who knew being dumped could be so much fun? Paradise might be a bit far off from Finsbury Park, London but Slow Club is certainly headed in the right direction with their album Paradise.
Posted by Paul POP! at 6:38 AM