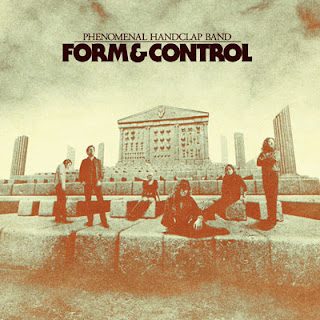 The Phenomenal Handclap Band is a tight-knit group of musicians and artists from Lower Manhattan and Brooklyn. Led by the Witch Doctor and the Medicine Man, the group has approximately 233,379 members in it who are all famous to some degree and if that weren't enough not one of them actually claps their hands. Instead, what the PHB do is create some sort of strange tripped out psychedelic disco funk that sounds more like it belongs at Studio 54 in 1979 than in the heart of the city. The band's latest album Form and Control is an exploration of just about everything groovy in music and when you have a zillion members it kind of makes musical sense to cram all that onto one album.

Varied, diverse, and most definitely unusual, the PHB refuse to do anything by the book. Instead, the band picks up the book of how things are supposed to be done and throws it out the window with the hope of never seeing again. The result is a freeflowing effort that is constantly in a state of flux and sounds like it. This isn't necessarily a bad thing as there's always something brilliant just around the corner and whether its dancefloor friendly, soul influenced ballads, prog-like rock explorations or indie pop, PHB do it with dramatic flair. These guys are good and they're not afraid to show it on Form and Control.

Form and Control is engrossing and loaded with heart. The fact that so much talent is gathered here makes the record a success by default. The songs, on the other hand, make it an absolute enthralling experience that's much more than the sum of the bands parts. What may have started as an cosmic idea and album ago has taken on a life of its own.
Posted by Paul POP! at 7:27 PM No comments: 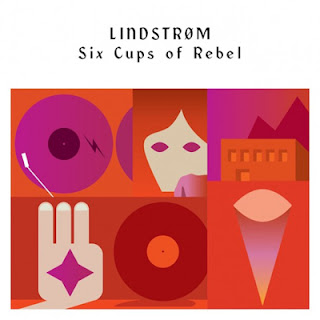 Lindstrom's latest record, Six Cups of Rebel is a nice return to form for the legendary producer.  Taking in sweeping atmospherics, vast panoramas, carnivals, discos, loads of synths and Todd Rundgren the record is as strange and epic as something named Six Cups of Rebel should be.  Sprawling out over the course of each cup or rebel, the record oozes, rolls, and hops around in all kinds of crazy.  Taking space disco, exotica, and electronic music to a whole different place Lindstrom proves himself to be a creative genius throughout latest record.

Lindstrom takes his imagination to new realms on this EP and while this is undoubtedly dance music, how he arrives at it is what truly is fascinating,  From creating an ambient masterwork to making a thumpy, bubbly house tune Lindstrom leaves no stone unturned in his quest to find the perfect beat.  Six Cups of Rebel is like listening to six individual servings of electronic music and it's just enough to leave you confused but full and satisfied by its conclusion.  This is a guy that has no problem going out there and not returning as many of his songs are a happy medium between proper dance music and the avant garde end of the electronic spectrum.  I think it's that ability to chuck it all into the wind is what makes Lindstrom such a fun artist.  In the end, there's a certain degree of unpredictability here and that's what really makes Six Cups of Rebel so enjoyable.

Strange, slightly avant garde, and on the constant hunt for something different Lindstrom makes house music far outside of the norm.  With bizarre swirls, found sounds, unusual samples, and a strong desire to be out of the ordinary Six Cups of Rebel rebels against the norm and succeeds.  This is a gripping record because it takes the foundation of house music and gives it a concussion.  It turns the norms on their sides and lets his imagination run wild.  We're better off because of it and because Six Cups of Rebel pushes things forward albeit in a non-conventional matter.  It's nice to have Lindstrom back and here's hoping he's got a pipeline full of material as original as this...the dance music community could use it.
Posted by Paul POP! at 7:22 PM No comments:

Email ThisBlogThis!Share to TwitterShare to FacebookShare to Pinterest
Labels: lindstrom 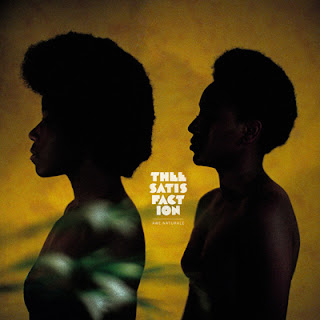 Thee Satisfaction are an all girl group that's lost somewhere between hip hop, funk, and free jazz.  They're a creative, political, positive force that takes on stereotypes, clichés, and the glass ceiling head on without fear.  They are a truly unique group whose sound is as influenced by Blue Note Records as it is Tommy Boy and their album Awe Naturale is a challenging and different record that demands to be heard.

With a vintage feel, a jazzy sound, and a story like approach Thee Satisfaction tell songs as much as they sing them.   The girls do a good job alternating between rapping and storytelling as easily as turning a switch on and off.  Their dual attack utilizing both approaches gives Awe Naturale an added dimension and brings the often classic sounds of the record bang up to date.   It's a truly intriguing record and comes off as being so original that it sounds like nothing else out there in the R&B or hip hop community.

Awe Naturale is just that, a natural free flowing expression from two of the most creative and original artists in Seattle.  They've got a unique approach, a fantastic handle on what makes a good song good, and one heck of a record.  If you like underground funk, soul, and or hip hop Thee Satisifaction bring them all to the table and shatter your pre-conceptions of them all.  Thee Satisfaction are the sound of the future and it's Awe Naturale.
Posted by Paul POP! at 7:17 PM No comments: 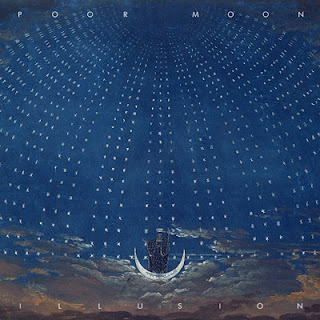 Poor Moon is Christian Wargo from Fleet Foxes, Casey Wescott from Fleet Foxes, and brothers Ian and Peter Murray from The Christmas Cards.  Together they've come together under the name of Christian Wargo's favorite Canned Heat song and created the Illusion EP.  With a sound residing somewhere between their day jobs and day bands, the Shins, and dusty plain states they lilt their way across the record in style.  It's all very nice mellow moody countrified pop that shuffles along ever so quietly and barely raises its voice.

Illusion is a shy, intimate record that brings back memories of lost Simon & Garfunkel recordings, rainy spring days, and hearts being broken.  Whether it's acoustic or electric, this is a delicate little record whose songs seem destined to shatter into pieces.  It's that fragility and that tender beauty that makes these somewhat folky songs so charming.   Despite my dislike for all things folk, there's just something about this record that pulls my heartstrings and makes me like it...maybe it's an Illusion but they’ve won me over.
Posted by Paul POP! at 7:12 PM No comments: 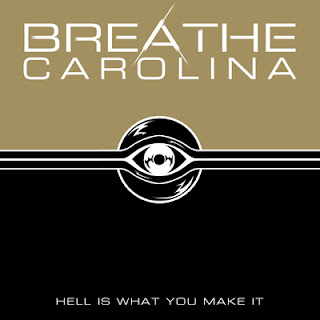 Well I'll be the first to admit Breathe Carolina's new album Hell Is What You Make Of It was not at all what I was expecting.  While I was quite convinced that they were just another typical Disneyfied emo band that was so slick they made the Gulf Oil Spill seem dry what they actually are were anything but.  Breathe Carolina undoubtedly have those elements within them, but they channel through them so much electronic equipment it's almost unfair to even think of them as being remotely emo.

Hell Is What You Make Of It is the sort of record that takes the best bits of everything and smashes them all together in the hopes that something good happens.  In Breathe Carolina's case magic occurs.  Taking electro, dubstep, emo, screamo and a heavy dose of pop the band create a dizzying array of tunes that are completely danceable, infectious, and overly emotional.

It's a wild ride through pop hooks, emotions, and exceptional songwriting.  This is a huge record in every sense of the word.  Not only does the thing sound bigger than life but Hell Is What You Make Of It's intentions are so obvious it might as well just hammer you over the head with it's hooks.  This is stadium sized pop music, it's multi-dimensional, easy to latch on to, difficult to forget and the sort of thing that will make girls swoon and guys envious.

Hell Is What You Make Of It is a very good record that crosses genre's and clichés to come up with something far greater than the sum of it's parts.  Breathe Carolina have done a great job of thinking outside of the box here and they've proven over the course of this record that you can indeed have it all and make it sound phenomenal.  Hell Is What You Make Of It and Breathe Carolina have made it into pop heaven.
Posted by Paul POP! at 4:09 PM No comments:

Ducky And The Whether 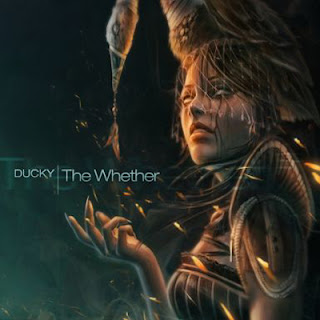 Ducky aka Morgan Neiman, has a producer’s instinct and a powerful voice to go along with it.  Making music as much as possible and taking things down a darker path seems to be normal for Ducky as she's been doing it since she was 13.  Firmly in touch with her sinister side as well as her inner goth, Ducky creates darkly delicious, ethereal chilled out pop that's got a certain degree of frigidity and detachment about it.

Her EP, The Whether is a downtempo, downtrodden, fragile work of beauty.  Taking chillwave and chilling it out one more step, Ducky crafts broken beats, strange samples, atmospherics and a sense of foreboding into something that's a stunning work of art.  Sounding as if the whole thing could break apart and end in tears Ducky creates this dingy, murky world where her songs hang on for dear life and come off like the Sneaker Pimps if they were more than, "Six Underground."

All in all The Whether is a gorgeous, fragile thing of electronic music that's impossible to walk away from. Ducky has a seductive voice and the production talent to captivate an audience no matter how slow or depressing she makes her songs.  She's awesome at what she does and The Whether is a clear example of that.
Posted by Paul POP! at 4:02 PM 1 comment: