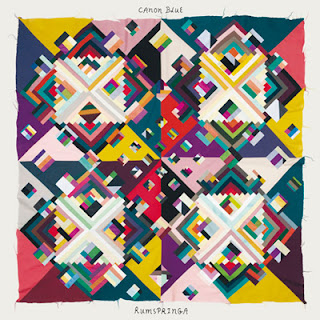 The two words I hate the most in all of musicdom is singer/songwriter. The mere sight of these words makes me ill. Needless to say when I saw Canon Blue's album come across my desk with a press release saying Canon Blue was actually singer-songwriter Daniel James I panicked. Then I put the disc on...and whoa...Canon Blue's Rumpspringa is so far away from the singer/songwriter end of things it's on the next continent of genre descriptions.

While Daniel James may in fact sing and write each song, this is not a one man folk explosion. Oh no, this is a full on orchestral pop record that sounds like there are fifty people backing him up instead of just one. Rumpspringa is truly an awesome record that’s sweeping, lush, and brilliantly constructed. Melodies layer one on top of the other, strings, horns, guitars all come together to create this dramatic masterpiece that's hypnotizing and very good. Employing over 20 musicians to translate his ideas into reality has paid huge dividends as this record is like a Scott Walker, Divine Comedy record on steroids.

While his day job might be touring as a member of experimental pop group Efterklang, Daniel James/Canon Blue clearly has a future as a solo artist. His songs are emotional, wide screen, and orchestral and Rumpspringa sees him coming into his own a fine songwriter whose able to visualize massive pop songs and make them materialize. If you love pop with a laid back vibe you will fall head over heels for Canon Blue because nobody is doing this stuff half as good as they are.
Posted by Paul POP! at 1:34 PM