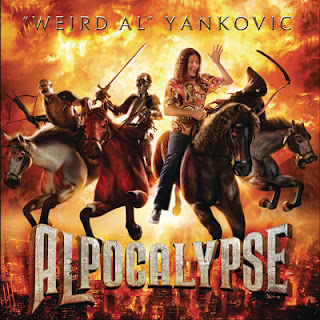 I was having a conversation with a friend of mine about Weird Al and our age. We figured we were both old because on his new album, Alpocalypse, we only recognized one of the songs he parodied. There was a time when you just knew who he was covering with his wacky songs...nowadays, it just sounds like he wrote them all. Now, that's not to say that he's still not absolutely the funniest songwriter on the planet because he is...I just don't listen to any mainstream pop music at this point in my life so I have no idea what he’s on about...I mean where’s, “Another One Rides The Bus?”

That being said, Alpocalypse, is a laugh riot. Clearly Weird Al has been making music FOREVER and how he's still able to make his material laugh out loud funny is beyond me but he does, and after a gazillion albums he's still got the knack. On Alpocalypse Weird Al tackles Lady Ga Ga, Taylor Swift, Miley Cyrus, and T.I. and then in one fell swoop pretty much destroys the dignity of the rest of the modern pop-erazzi. It's all great stuff and his band is ridiculously good; how they cope with being so good and being in a parody band is beyond me but they do...must be the Pentiums.

Of course there's loads of Dr. Demento ready original material and polkas to shuffle in clown shoes to which makes this record great. Alpocalypse is pretty much one of the funniest things I've heard all year and the cover alone is priceless. With the world scheduled to end later on in the year, why not prepare with the Alpocalypse; the end never sounded so good!
Posted by Paul POP! at 3:58 PM