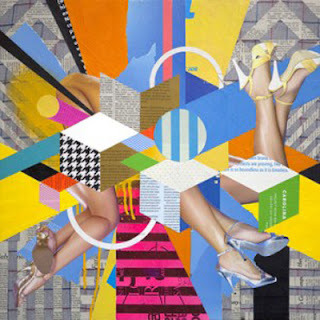 There's math rock, there's post rock and then there's string theory rock and that's where Noxious Foxes come into play. This frenetic duo takes music, applies a turbo charger to it, speeds it up some more and then lets it run rampant. Their newest album, Legs, is like taking the entire Oxes discography and playing it all at the same time while running around circles on amphetamines. To say this record is crazy would be an understatement and one kind of guesses that's exactly what these dudes are hoping for; you to think they’re crazy.

With rocket powered jazz riffs, power chords, time changes, drumming with four hands, and just two people Noxious Foxes are a study in chaos theory come to life. How they create such strange music that collides at the speed of light and creates musical fission is beyond me. But, one guesses that with so much going on, the reason why there isn't one word on this album is that they just don't have time to include it. Why sing when you can throw in 20 more time changes or chord progressions in a song?

This is complicated Rocket Scientist kind of rock and roll that ploughs you over with its sheer technicality, hyperactivity, and volume of riffs. It's such a busy record that the faint of heart might just die listening to this record because their feeble brains stand no chance of processing what's going on here. Truth be told, none of us might be able to understand what exactly the Noxious Foxes are all about or what they're even on...but who cares because Legs is like the sound of the apocalypse if it was caused by algebraic equations. Death by math...now that's a bad way to go.
Posted by Paul POP! at 4:29 PM