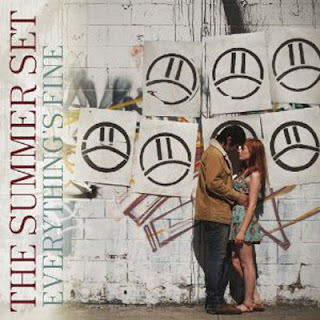 The Summer Set is one of those bands that straddle the line between being indie, emo, and total pop. They're the sort of band you'd expect to turn up in a Disney movie at a prom but have enough of an edge to them where they wouldn't turn up just to be cool. Their new album, Everything's Fine, is an absolute beast of a record with so many ridiculously catchy songs that it's almost parasitic in its attempts to attach itself to your soul. Upbeat and surprisingly chipper despite having a frown as their logo The Summer Set are a fun listen no matter where you stand musically.

Everything's Fine proves time and time again that The Summer Set have the ability to turn any melody they stumble upon into something massive. They must see harmonies and huge songs in their dreams because just about every song here is awe inspiring in its attempt to reach for the stars and sweep you up emotionally. Everything's Fine does such a good job of wrapping it's emotions around the listener that I'm pretty sure most girls who listen to this record will have a sob fest over ex boyfriends, dates gone wrong, crushes crushed. This is high school in the form of an eleven song album. For those of us out of high school (or long past high school) it's a fun listen and you can almost feel the youth coming through each song.

Everything's Fine isn't anything ground breaking but it is a lot of fun. Jammed packed with melodies, soaring songs, emotional outbursts and copious amounts of sugary sweet choruses this record is clearly destined for big things! Don't believe me? Just listen to, "Must Be The Music," once and tell me differently. I rest my case.
Posted by Paul POP! at 6:30 AM

Email ThisBlogThis!Share to TwitterShare to FacebookShare to Pinterest
Labels: the summer set