New Zealand Is Still At CMJ 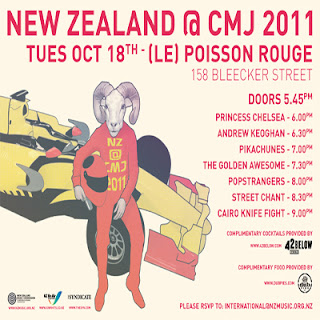 A bit past its sell by date, but impressive none-the-less, the New Zealand @ CMJ 2011 is packed to the gills with Kiwi pop bands from all over the proverbial genre map. This fifteen track collection contains a bit of everything from indie rock, indie pop, electronic, and even sorta gothy stuff. What surprised me about this compilation is that I knew about half of these bands already but had no idea that they were from New Zealand.

Always a fertile ground for indie, New Zealand cemented it's place in the indie lexicon long ago with records from bands like The Chills and labels like Flying Nun. Recently the island nation has seen a re-birth as a hub for independently spirited music and that's where New Zealand @ CMJ 2011 comes in. Highlighting this year's crop of stars, the compilation includes tracks from Cut Off Your Hands, Princess Chelsea, Mulchzoid, Pikachunes, Unknown Mortal Orchestra, Street Chant, The Golden Awesome, Popstrangers, She's So Rad, Two Cartoons, Evil Twins, Tiny Ruins, Parallel Dance Ensemble, Andrew Keoghan, and Cairo Knife Fight who proudly carry on the Kiwi tradition. The whole album is ridiculously good and there's not one single duff track amongst the bunch proving just how fantastic the New Zealand scene is.

Of the fifteen tracks my favorites would have to be...the jangle pop goodness of Cut Off Your Hands', "Fooling No One," the quirkiness of Princess Chelsea's, "Frack," Pikachunes electro tinged pop, Street Chant's American influenced indie rock on, "Scream Walk,", and the dark swirling post grunge of Popstrangers', "Happy Accidents." It's a fantastic album that I have no idea how to get hold of since it seems as though it was a promo handed out during a CMJ showcase. But, if you can find it on the interwebs or something, I'd highly suggest picking it up, downloading it, streaming it, or whatever...it's that good.
Posted by Paul POP! at 6:16 PM

Email ThisBlogThis!Share to TwitterShare to FacebookShare to Pinterest
Labels: cut off your hands, new zealand at cmj, pikachunes, princess chelsea