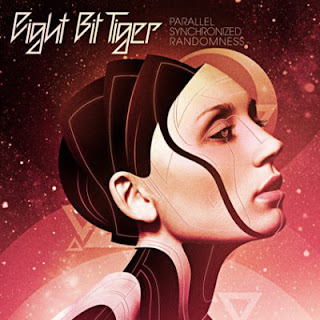 With a name like Eight Bit Tiger you'd expect the band to be something like a midi-Commodore 64 pop band obsessed with Mario Brothers covers. Well, if you're like me you'd be expecting the wrong thing when you pop on their album, Parallel Synchronized Randomness. While there is an undoubtedly electronic angle to their music, Eight Bit Tiger are more like 64 Bit Tiger than anything so lo-res.

Super slick, polished and as deadly as saran gas, Eight Bit Tiger make disco punk that takes everything Radio 4 perfected back in 2003 and turns it up to 11. Machine loaded with hooks and vacuum packed with massive songs, Parallel Synchronized Randomness is the exact opposite of it's title. Rather than sounding completely scattershot and random, much of Eight Bit Tiger's album seems calculated to perfection; it's as if the record was run through the Einstein Popmatic Production Machine. While this might sound like it makes the band come off as cold and almost over produced, it's not the case as Parallel Synchronized Randomness song's are so ridiculously infectious that a flu-shot might be required prior to listening.

With dazzling synths, funky guitar riffs, tight, crisp beats and vocals that hover somewhere between Phoenix and Jamiroquai the record is a funky dance floor weapon of destruction. This is the kind of record giggly girls get drunk to and fall over themselves for and trust me I know this. Parallel Synchronized Randomness is such a huge disco punk pop record that if it were released in 1983 it would have clobbered Duran Duran out of the charts. Incredibly fun, sugary sweet, and stupendously good there's almost nothing to dislike about these guys. Sure it's slicker than the Gulf oil spill, but this is one record that's easy to recommend because it's just so good.
Posted by Paul POP! at 6:12 PM