Zechs Marquise Krank Up The Krautrock 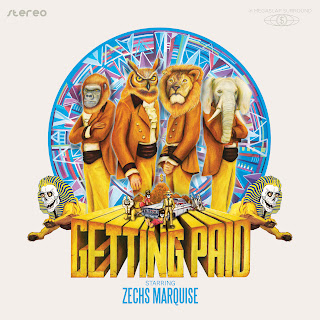 Zechs Marquise, the El Paso, TX quintet have returned with their sophomore album in tow and aside from taking a healthy dose of swagger from the hip hop community the band continue to reside deep in the nether regions of the galaxy. The bands album, Getting Paid doesn't contain a single, "hit," on it but is instead packed to the gills with prog rock explorations of dimensions, time and space.

Sounding like a modern incarnation of early Yes run through the Kraut rock jam generator Zechs Marquise crank out the space jams that linger on forever. Getting Paid is an epic space jam that's so hypnotizing that it's very easy to get lost in the sea of riffs and odd time changes. These guys can clearly play and they aren't afraid to show it. With guitars, drums, and now keyboards in harmony their sound has expanded beyond the reaches of the universe to the great beyond and we as listeners should be happy to follow them. Getting Paid is psychedelic, occasionally funky and sometimes even metallic, but always out there; it's what makes them awesome at what they do.

Technically proficient and ridiculously imaginative, Zech Marquise has created an absolutely massive album with Getting Paid. And while they might not get paid (a lot) for what they do musically, they clearly love what they do and you can hear that on each one of the never-ending jams that make Getting Paid up.
Posted by Paul POP! at 6:07 PM