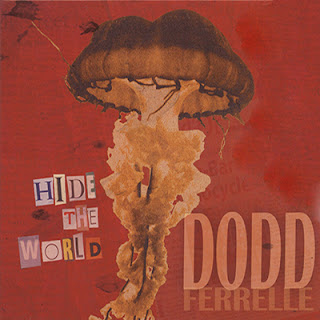 Someone, anyone, please tell Jason and the Scorchers that their legacy is safe for the fine folks that make up Dodd Ferrelle's band have secured it for them. It's been a long time coming and after a decade of slogging away everywhere under the sun and then some, the band has pretty much taken the countrified roots rock thing and perfected it. Dodd's new album, Hide The World is Americana that's been roughed up, beaten down, and rocked out. Its rustic rock with an edge and a heart and just like Jason and his Scorchers, Dodd and his band are unafraid to cross genre borders illegally.

Hide The World is emotive, twangy, and a bit down on it's luck and it's all of these things combined that make this record enjoyable. So many people do Americana and rustic folk rock but Dodd and his band take an eclectic back road to arrive at their brand of pop music and it's as if they all broke their hearts getting there.

Firmly in touch with its country roots the band is able to write tear jerker’s like, "Half Broken," as if it were second nature to them. It's seriously tragic stuff that could make a grown man cry. Thankfully, they also know how to kick up a little dust and rock out and for every weepy moment on Hide The World there's a good rocker to lift your spirits up. It's all a bit rollercoastery but it's ok because the songs work well together and keep you listening.

Countrified, eclectic and unafraid to rock and roll Dodd Ferrelle has carved out a notch for himself. Hide The World is the sort of record that doesn't need to be hidden, but played and played often for it's the kind of Americana, country rock it's ok to like.
Posted by Paul POP! at 2:20 PM