They Were Social Climbers 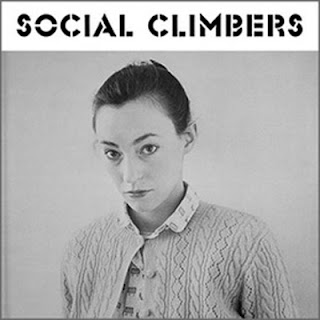 Despite their name, Social Climbers are not really doing any sort of climbing at this point in their career. However, back in 1980 they were completely upwardly mobile climbing over other New York post punk and no wave bands like rungs on a ladder. Their self titled debut album may be 30 years old, but it still sounds relevant and incredible and as if it were a Suicide side project.

Angular, angsty, and sounding as if it's about to fall apart, Social Climbers is a statement to the sound and agitation that made up so much of the No Wave movement. Sandwiched between songs are funky breakdowns, broken synths, screams of agony, screams of pleasure, angular and wrangled guitar riffs and an overwhelming sense that no matter how close the end of the world is, there's always time for one last dance. "Chicken 80," is a perfect example of this as this tune is a pure and simple hit that grooves mightily and reels you in with ease. It's the sort of song that in four minutes defines clearly what punk funk is all about and why it's amazing.

While it's evident that Social Climbers were on to something with their debut, the band never quite received the recognition it deserved. None the less, Social Climbers is an undiscovered gem that's so well put together it's a crime it never became popular. Drag City and Yoga, however, have been cool enough to dig up this punk funk artifact and restore it to its deserved place as a classic.
Posted by Paul POP! at 4:27 PM