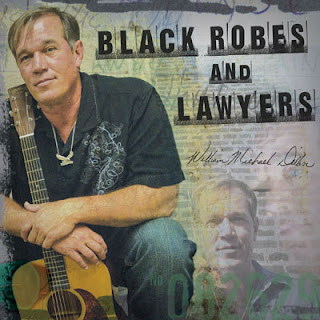 Talk about tales worthy of many, many songs. William Michael Dillon spent nearly 28 years in prison. Framed for murder in 1981 and exonerated through DNA testing in 2008, Dillon has seen a lot more than he ever wanted to or imagined. He's now taken those tales and experiences and put them to song that will leave you gripped.

His debut album, Black Robes and Lawyers is an cathartic experience that sees Dillon coming to grips with all that he's been through and his new found freedom. Mixing country, roots, rock and even blues, Dillon paints a vivid picture in each of his songs. This is an epic record that's been a dream come true for Dillon. Captivating and tragic all at the same time, you can help but sit and listen to every word Dillon has to say because he's seen so much over the last three decades.

Black Robes and Lawyers is stunning stuff that's surprisingly good bluesy stuff and you'd never guess that this is Dillon's debut album. Sounding like a veteran artist in his prime, Dillon crafts songs with ease from the wealth of material at his disposal and thanks to producer Jim Tullio he brings those songs to life with such professionalism you'd never know that this record was 28 years in the making.