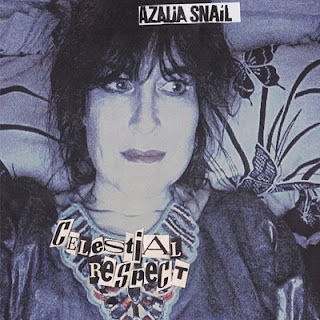 Azalia Snail has been making music for nearly thirty years. Originally creating music for her own movies, Azalia Snail quickly settled into the DIY culture of self-recording and releasing songs. Often introspective and influenced by the likes of Syd Barrett and Brian Eno, Azalia Snail's songs are often awash with atmospherics and a haunting sense of place. Having made a dozen records over her career, Azalia Snail has pretty much perfected her craft and her ability to write songs. Her latest album Celestial Respect is no different and further contributes to the lasting legacy that is Azalia Snail.

Celestial Respect is a musical journey that deals with the complex and disheartening world we all live in. A record for our times without a doubt, Celestial Respect is as scary at times as our world would dictate. At times sounding like a disembodied spirit, at others the voice of an angel, Azalia Snail creates a fascinating sound collage of guitar sounds, ethereal vocals, and airy atmospherics. Reminding me at times of old arty 4ad records by This Mortal Coil and His Name Is Alive, Azalia Snail find melodies in the haze and etherealness and harness them. It's truly something that has to be heard to understand.

Awkward for sure and eerie at its worst, Celestial Respect is still a fascinating listen. This heavenly but askew record will linger in your soul long after it wafts by. That being said, it's really no wonder then, that Azalia Snail named the record Celestial Respect because it's sounds are truly unearthly.
Posted by Paul POP! at 6:17 AM