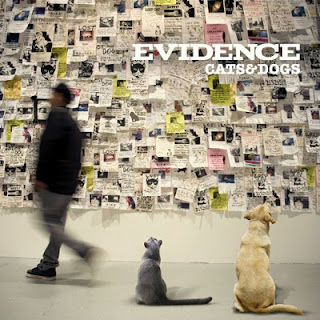 Evidence, the producer/MC who was a member of the godlike rapping geniuses known as Dilated Peoples has just released his sophomore effort and it does not disappoint. Entitled, Cats & Dogs, Evidence takes his legacy and his current status and elevates them one notch higher through this record by providing crisp, edgy rhymes with beats so tight that air cannot escape them. Taking the hip hop world and making it all his own, Evidence is clearly unafraid to leave traces of his presence wherever he goes.

In typical Rhymesayers fashion, Cats & Dogs is a top notch record that's so well produced and put together that it stands head and shoulders above most rap records. That's just on the outside...a quick listen on the inside reveals a record that's angsty, edgy, and flows like Niagara Falls. Evidence throws out rhymes like a conveyor belt of nouns and verbs and when he teams up with the numerous special guests (Raekwon, Prodigy, Aesop Rock, Slug to name a few) his game is elevated even further. Wordsmith seems to be a bit of an understatement when talking about this guy and whether he's mad as hell or searching his heart the guy can turn a phrase in a millisecond.

Cats & Dogs is a fine second album from a guy who knows how to make darn good hip hop records and has done so for ages. With this record safely under his belt, I'm pretty sure that Evidence's legacy is secure. Evidence is LA and LA is Evidence and all you need is proof is to listen to Cats & Dogs.
Posted by Paul POP! at 1:44 PM

Email ThisBlogThis!Share to TwitterShare to FacebookShare to Pinterest
Labels: evidence