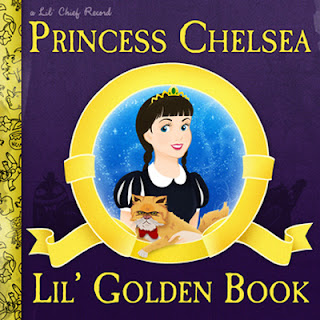 The world of Princess Chelsea is a magic one filled with a childlike sense of wonder that's dark and fascinating. Her latest album, Lil Golden Book, looks just like it's name sake and is as curious as those books were when you were growing up. Sounding like a the Cranes with a Kiwi accent, Princess Chelsea weaves a haunting spell of bewilderment and uses her tinkly, twinkly, piano sounds to charm you into musical submission.

Princess Chelsea creates a fantasy world in which we're allowed to roam around in. It's a strange, haunted world that's theatrical, full of make believe, and a high concept production. From the album looking like a Lil Golden Book to Princess Chelsea sounding like Shirley Temple lost in Wonderland Lil Golden Book is so weird it's wonderful. I'm glad she lets us hang out with her in her world because it's a fantastic place that's filled with enough oddities and strangeness to make you want to return over and over again.
Posted by Paul POP! at 4:28 PM