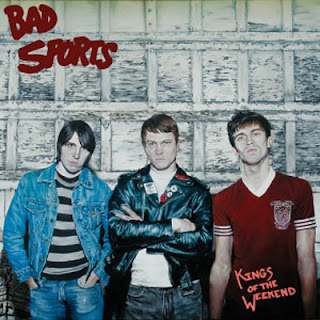 Bad Sports are a band that has clearly listened to a lot of Ramones and even more three chord punk rock in their short time together. Fusing snotty punk rock, pop punk, and even a bit of power pop these poor sportsmen, create a brash, hyper, and rambunctious blend of music that will leave you with a broken neck and song in your heart. Their album, Kings of the Weekend is a super quick, spazzy blast of fun that will have you reaching for copies of Maximum Rock and Roll and your leather jacket.

Clocking in at under thirty minutes, all this record is missing is the count off's that made the Ramones famous. Kings of the Weekend is an album that's loud, fast, rebellious but just sentimental enough to have a heart. It's an explosion of three chord fun that's ridiculously catchy, in love with power pop, and so simplistic in its approach that's impossible not to like. The Bad Sports may be poor sportsmen, but they're really good at what they do.

There's nothing unusual or weird about Kings of the Weekend, it's just straight ahead punk rock with a broken heart. The Bad Sports have written a super enjoyable record that’s not out of place today or 1977 and that's what makes them so cool.
Posted by Paul POP! at 4:16 PM