The Boxing Lesson Depart For Space 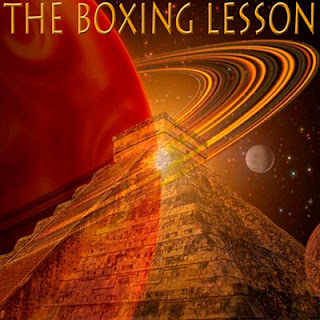 The Boxing Lesson is a dynamic duo from Austin, Texas that sound as if they've been lost in space for the last twenty years. Taking prog rock out of the Texas plains and into hyperspace, The Boxing Lesson create hazy, drugged out, jams that seem to linger forever. The title of their latest record, Muerta, translates into death, dead, etc and after listening to this record several times I can see it being the soundtrack of your soul departing to the great beyond; it's that epic.

Made up of just four songs, Muerta, plods its way along as if it was taking its last breath before shuffling off alone into deep space. It's a gorgeous record that sounds as if fifty members were in the band instead of just two. The band's dreamy vocals are layered on top of all this ethereal, airy music which in turn creates an atmosphere of vastness and lushness. It only makes sense then, that after three songs of heavenly guitar work and barely there vocals, the band winds up Muerta, with a song called, "Drone To Sleep."

A record for another galaxy, The Boxing Lesson's Muerta is a gorgeous trip to the great beyond alive or dead.
Posted by Paul POP! at 5:35 PM