Clevie & Steely Take A Look Back At Memories 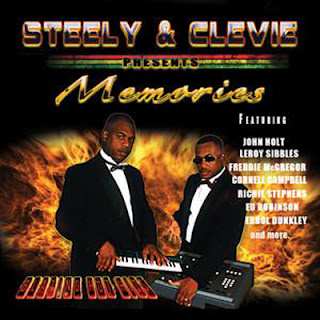 Cleveland "Clevie" Brown and Wycliffe "Steely" Johnson are two legendary names in Reggae circles. These production masterminds have worked on so many reggae records it would take me days to list them all, but suffice it to say they're catalog extends back years and years. So it was a devastating event when Clevie lost his partner in crime in 2009. The loss of someone who was such a huge part of Clevie's career could have meant the end of him working on records. But after soul searching and motivation Clevie has decided to carry on.

His first effort on his own, Memories is a DVD CD set that compiles fourteen tracks and includes a documentary on the memories of his career. The set is awesome and gives us, the listener, an inside look at one of the most influential production teams in not only reggae but music in general. From the fourteen laid back jammin tunes to the fascinating look back this is an entertaining set that doesn't disappoint.

While Steely will undoubtedly be missed by everyone, Clevie has proven his ability to go at it alone. And while things may never be the same, they're going to ok. Memories is a perfect introduction to the world of Clevie and Steely and something any true reggae fan should own.
Posted by Paul POP! at 3:48 PM

Email ThisBlogThis!Share to TwitterShare to FacebookShare to Pinterest
Labels: clevie and steely