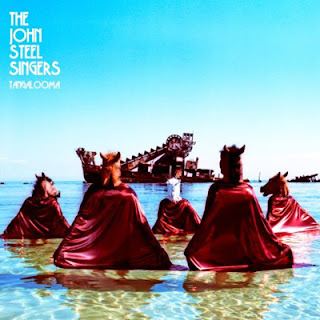 The John Steel Singers sounds like the name of a 70's easy listening combo that sings the hits of Ray Conniff, Andy Williams, and Tony Bennett in a leisure suit kind of way. While that may sound like what they play, in all actuality The John Steel Singers are an indie pop band that sound like they were once part of the eclectic Elephant Six collective. Taking jangly indie pop infusing it with an AM radio sensibility, horns, and the thought that a day without sunshine is a bad thing, the band are simply awesome at what they do. Their latest album, the oddly named Tangalooma is a fantastic pop record that's a melodic treat of epic proportions.

In an age where everything is electronically based, inspired, and created, The John Steel Singers seems to have gone back to the 70's and while not making easy listening album they have sought to make a pop record that's large in it's scope and sound. Tangalooma at times will remind you of Apples In Stereo, Elf Power, and Of Montreal. It's the sound of Athens outside of Athens and it's absolutely brilliant. Lush, orchestral, baroque-ish, and ridiculously catchy these Singers have created a record that's easy to listen to.

The John Steel Singers have made a great record here that's as rooted in the past as it is the present and their apparent love for all things AM Pop, Elephant 6, analog, and just good music guides Tangalooma into the promised land. I love indie pop like this. Tangalooma is quirky, light hearted and just plain fun. How can you not like something like that?
Posted by Paul POP! at 1:36 PM