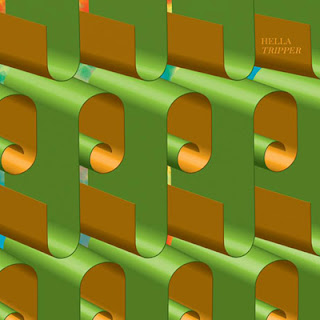 Hella is one hella of a band! Pun intended. This dynamic duo have been around for just over a decade and in that decade they've made such a racket with their sonic experimentation that it was inevitable that large numbers of people would eventually take notice. With records being produced at an alarming rate and guitars being destroyed as often it only made sense that the band take a break from performing and recording in 2010. Thankfully, they reconvened this year and began building the framework to what would become their new album, Tripper. Now with the record in the public domain...you should be afraid...very afraid.

Tripper is an absolutely massive album of chaos come to life. Its thrashy instrumentation and frenetic pace sound like string theory being torn apart at the seams. This is music for the apocalypse and it's amazing. Without a vocal around and with guitar riffs bouncing off of guitar riffs while lacerating blast beats into two, the band attack songs rather than play them. Who has time for vocals when you're on the warpath? With a ferocity and velocity that's comparable to a blitzkrieg, Hella manage to destroy everything in its path. With ten songs of absolute mayhem Tripper is like listening to the sound of metal scraping on metal repeatedly for forty five minutes.

You might very well lose your hearing or even potentially die from listening to Tripper but that’s a small price to pay for such quality. It's pace, urgency, and brutality may be too much for those who are weak of heart or mind to handle. Hella are brutal, their album Tripper is a juggernaut of instrumental metallic destruction and it's something you need in your life...like air.
Posted by Paul POP! at 4:21 PM

Email ThisBlogThis!Share to TwitterShare to FacebookShare to Pinterest
Labels: hella