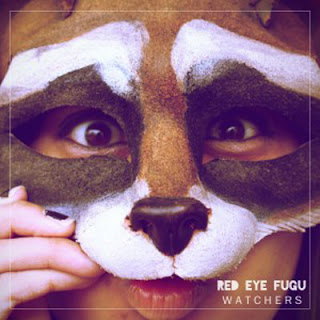 Red Eye Fugu is a strangely named band that makes even stranger pop music. Their album, Watchers, is a slightly Balearic, slightly downtrodden, slightly synthetic pop album that hovers between chillwave and depression. Fusing laid back grooves with slightly sung vocals, REF sound like west coast pop that doesn't want to get up. Imagine Brian Wilson never leaving his sand box and you're on to what they're about.

Watchers is so ethereal that if you're not paying attention this record will waft on by you. In fact, I've now had to listen to it five times because I keep losing track of the songs. REF are so unobtrusive in their musical pursuit they're like clouds...they just gently roll by without making too much of a fuss. Whether or not this is a good thing is up to your personality, but I found that I had to seriously concentrate while listening to Watchers because there just wasn't anything going on with it.

Red Eye Fugu isn’t as creepy as the cover of Watchers suggest. Instead, this group seems to be incredibly timid and shy and really almost hesitant to come out of their shell. Even at their most upbeat, they still seem so relaxed it's as if they wrote these songs in their sleep. Watchers isn't bad...but it's just missing something to elevate it to being good or great. I'm not sure what that "it" is exactly, but it's just not there. Whether it’s too mellow for its own good or just not catchy or all of the above is open to debate, but I had a hard time clinging to this record or even wanting to.
Posted by Paul POP! at 6:14 PM