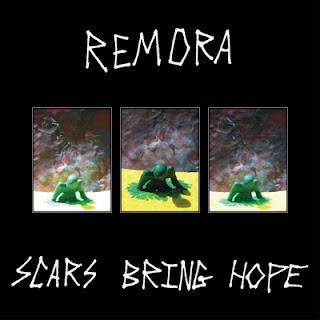 Remora's by nature are parasitic. Clinging to the backs of other aquatic animals in hopes of acquiring food these creatures live their life attached to a host. Remora the band isn't quite like that, but some would say clinging on to the same music scene for fifteen years is a bit parasitic. Having been around for ages playing minimal, nearly ambient, post everything guitar music, Remora have kind of made a name for themselves by making strange music for strange people and their latest album, Scars Bring Hope is really no different.

Sounding like a gothic Beat Happening on large amounts of lithium they moan their way through Scars Bring Hope as if the world was ending. Ambient passages and minimal guitar works blend into wondering post apocalyptic sing-along’s for lost souls. It's epic, minimal, and downright frightening. Washed out guitar noise careens off strange lyrics, strange sounds echo around the environment, and a world of eerie atmospherics sets up Scars Bring Hope as being a very diverse and strange album.

Pop music this is not...but rather the sound of Remora's nightmares put to record. This is Brian Eno as a manic depressive, The Beat Happening not happening, this is the sound of tortured artistry coming to fruition. It's a bizarre and spooky ride and the kind of thing that will have you calling for priests if you listen to it on headphones. I'm not sure if I like Scars Bring Hope but I’ll never forget the experience.
Posted by Paul POP! at 6:13 AM

Email ThisBlogThis!Share to TwitterShare to FacebookShare to Pinterest
Labels: remora