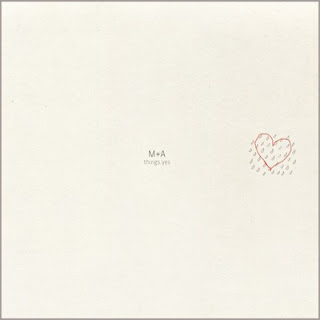 M+A is an Italian synth pop group named after its members Michele Ducci and Alessandro Anigioli (M+A get it). Together these two pizanos put together some of the coolest synth pop to emerge out of Italy since Georgio Moroder dominated (nay created) electronic music. Their album, Things. Yes is a fun, laid back pop record that at times will remind you of the Postal Service, Figurine, and maybe even Tahiti 80.

Things. Yes is a Trans European Express of pop grooves that are like rays of winter sunshine; sure to lighten up any room they're played in and plaster a smile on your face no matter what. Made completely in M+A's respective homes and not in a studio, the album surprisingly doesn't have a lo-fi, or bedroom pop feel but rather a big room, modern, and slick sheen that's a credit to their ability to will their computers into doing things that they probably shouldn't. This is DIY that sounds high street and it's the sound of two friends who seemingly have psychic abilities when it comes to songwriting; each knowing what their songs need to sound amazing.

As a result of their unerring partnership, Things. Yes is a fun record that has a sense of wonderment and whimsy about it. Sure, it's completely danceable and polished but at the same time it's got this playful feel to it that comes from their DIY spirit and ongoing friendship. M+A are very good at what they do and Things. Yes is a marvelous record of bedroom synth pop that's so much more than a bunch of blips recorded on a cassette tape.
Posted by Paul POP! at 12:30 PM

Email ThisBlogThis!Share to TwitterShare to FacebookShare to Pinterest
Labels: m+a