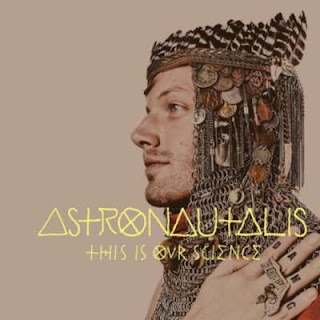 Local kid made good, Astronautilis has constantly proved throughout his career that you can make a non-hip hop, hip hop album if you try. There's no other artist that so easily weaves in and out of indie and hip hop quite like Andy does and his latest album, This is Our Science is a brilliant opus of artistic songs and non-hip hop hip hop. This is a sweeping, slightly epic, occasionally edgy but always top notch album that brings more to the table than most artists do in their career.

Alternating between piano ballads and rough hip hop songs, Astronautilis demonstrates not only his writing prowess but his musical prowess as well. This is as diverse an album as you are likely to hear in your lifetime and it's so all over the place you'll need a road map to keep up. Andy weaves and swerves his way between his songs like the Stig on a test course. Throwing rhymes at rapid fire rates but still finding time to make great songs that are actually musical he's made This Is Our Science sound something like POS fronting Modest Mouse or Nick Cave collaborating with Atmosphere.

A club oriented hip hop record (if you want to call it that) this is not. Instead, this is total headphone music with brilliant words that you need to hear, fantastic arrangements that are subtly genius, and songs that won't go away. This is intelligent, heady stuff. Let’s face it, there aren't many rappers who would name songs, "Dimitri Mendeleev" or "Thomas Jefferson" and it just illustrates the effort, intelligence, and craftsmanship that Andy has always put forth. This Is Our Science is so good that if 2011 - 2012 isn't the year of Astronautilis then there's truly something the matter with the world.
Posted by Paul POP! at 5:01 PM

Email ThisBlogThis!Share to TwitterShare to FacebookShare to Pinterest
Labels: astronautalis