Still Corners Are Creatures Of An Hour 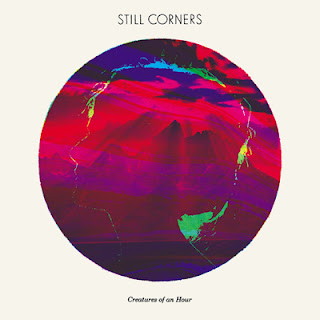 Still Corners seems to be an apt name for this dynamic duo. As the story goes, it was a dark and foggy night when the two members (Greg & Tessa) ran into each other and it was as if the musical fates had not only brought them together but gave them direction in the middle of that fog. Hardly a band with a frenetic pace or sense of urgency, their latest album and second overall, Creatures of an Hour also seems like a perfect name for a band that seemingly spend loads of time regularly hiding in the shadows just after darkness falls.

Creatures of an Hour is so quiet and so cinematic that it almost seems like it enjoys being the soundtrack to the world around it. Playing out with ambient textures, disengaged vocals and a barely there kind of attitude it's almost as if Still Corners are ghosts who were sent back to haunt our dreams and lives with beautiful sounds. Creatures of an Hour is truly gorgeous stuff that takes the wispy sounds that inspire them, process it through the odd distortion pedal, and then filter it through a ghostoscope. It's all like stillness and shadows here and it's as if the band follows you around whispering the songs into your ear.

A more atmospheric post shoegazing ghostlike band you are unlikely to find. Their otherworldly charm and ability to harness distortion and curb it to their every whim allows Still Corners to do things to their songs that make them awesome. Creatures of an Hour is the soundtrack of the Sandman and the dreams you have at night and whether they're nightmares or not Still Corners silently plays along to them.
Posted by Paul POP! at 1:32 PM