March To The Nation Beat 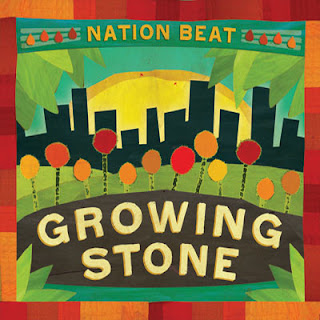 Holy diversity Batman...there are bands that mix genres and sounds and then there's Nation Beat. This American/Brazilian collective is a band that are unafraid to make musical gumbo and mince meat with their songs combining anything and everything into a melting pot to create a platter of globally informed sounds. Their album, Growing Stone, is an encyclopedic exploration of sound that's literally all over the map.

Coming from either side of the equator, Nation Beat switch between ideas so easily and so fluently it's almost difficult to determine where they are from. With equal parts South American vibes and North Americana, Growing Stone sounds like what would happen if Carnivale took place in a Cracker Barrel. With Brazilian maracatu drumming, Appalachian folk music, funk, country, and even blues making an appearance on the this record it's easy to see why these guys are all over the map. This is an album with international appeal that really doesn't sound like anything else; it's rootsy and groovy, it's tropical and rustic, it's diverse and new and old and familiar. Growing Stone as a result of all this is one heck of a record that couldn’t be more fun to listen to.

If you ever wondered what being open minded sounded like and what embracing the global community offers, look no further than Nation Beat. This is a band that clearly gets the idea of being part of a global community and has simply put a beat behind it. You'll be hard pressed to find another album like this one and especially one as good as Growing Stone.
Posted by Paul POP! at 5:28 PM