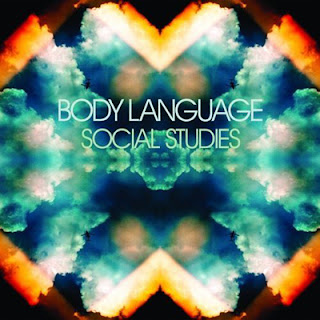 Reading Body Language can be difficult at best; a raised eyebrow could be misconstrued as something it actually isn't. We've all been there. Much like the language, the band Body Language is a difficult group to get a handle on. This four piece band mixes up influences ranging from chill out, house, indie pop, r&b, funk, and just about anything else they can get their hands on. The result is a confusingly good album that goes by the name of Social Studies.

Social Studies seems like a great name for a record that clearly is geared toward getting your feet shuffling in some sort of pattern and what a better way to be social than dancing the night way to Body Language. Social Studies is a superbly infectious record that's melds it's influences so seamlessly with the beats to match that the album, despite coming for fourteen angles at once, is remarkably cohesive. From it's adorable indie pop influenced moments that are like uppity Stars songs to the more upfront house influenced ones Social Studies keeps you moving in one way or another.

Lush synths, hugable melodies, deep grooves, and chilled vibes power this album throughout. Body Language are creative in their use of influences and manipulate them in new ways to create songs that are additively danceable. Social Studies is a dance music album with an indie heart and a loveable soul, so it only makes sense that it was so easy to latch onto. The best of every world, Social Studies is an entertaining album that's worth studying.
Posted by Paul POP! at 4:22 PM