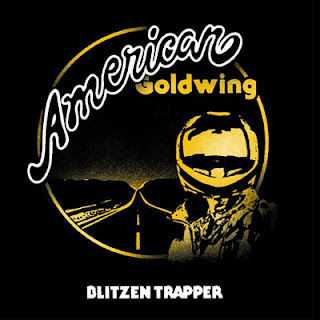 Somewhere right now, The Allman Brothers are giving themselves hi-fives. You see, Blitzen Trapper have taken that country rock template and made it all their own and that's got to make people like the Allman Brothers and Crosby, Stills, and Nash pretty darn happy and more than likely their bank accounts richer. That being said, Blizten Trapper's latest album, American Goldwing, is the best dusty early 70's rock and roll record never made by any of those guys!

With loads of twangy guitars, banjos, and drawn-out vocals this is country music for the hipster set. You can almost picture kids with trucker hats, cowboy shirts, and vintage cowboy boots shuffling along to this record endlessly at some dive bar. And quite honestly, that's the perfect place for Blitzen Trapper. They're not country enough for Nashville and certainly not rock and roll enough for the classic rock crowd, but they do reinvigorate that classic country rock sound for a new generation and it works well for them.

American Goldwing is a rustic record that's so much so, the grit and backwoods scent almost comes through the speakers. Blitzen Trapper so successfully writes heartbroken, yearning songs that not only have they made a career of it, but one can't help but wonder if they're ok. I mean just read the song titles, "Love The Way You Walk Away," "Your Crying Eyes," and "Taking It Easy Too Long," they're not the most upbeat optimistic lot of tunes you'll hear. Yet, miraculously they put one heck of a veneer on them all. The result? Well that’s an album that strums and shuffles its way into your brain and subliminally has you wanting to hear lots of pedal steel and move to the country. You might hate country music, folk, and Americana (like me) but I challenge you not to like this record. It's that good.
Posted by Paul POP! at 2:06 PM