Spank Rock Is Anything But Boring 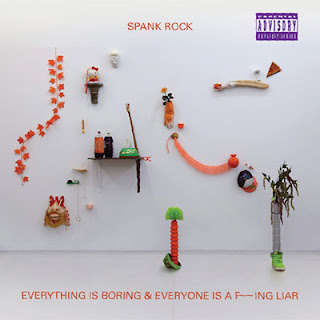 I miss Miami. Having been born and raised there it's hard not to miss it. There's three things you can always count on down there...sun, lack of seasons, and bass. Lots of bass. Without Miami, bass would have never really been anything else but a low end frequency. But in Miami, it's an art form and it should come as no surprise that a lot of hip hop artists idolize the classic Miami bass sound. Spank Rock is one such artist.

Spank Rock pays such a tribute to that Miami sound that it might make 2 Live Crew blush. With a sound that sounds like my high school parking lot did way back in the day, Spank's album Everything Is Boring will take you back to little cars with HUGE speakers! If you have a 1987 Toyota Celica with 2 14" woofers in your back seat instead of a back seat then you know what I'm talking about.

This is music to cruise Ocean Drive to. You're car will rattle, you're ears will fall off and every dance floor on South Beach will be packed to the sounds of Spank Rock. Easily one of the best Miami (non-Miami) sounding things you're likely to hear, if you've ever had a fascination with bass then you need this record.

While undoubtedly modernized and sounding a bit New Yorkish at times, the Miami influence on this record is huge. Even at it's slowest moments Everything Is Boring is rude, crude, and filled with enough noise to shake anyone within a 50 foot radius. The bass waves and foul language gush out of speakers like a geyser. It's the kind of thing that would make parents recoil in horror and that's why it's amazing.

And yet, what's really great about Spank Rock though, is that even though he's so in love with bass he's married to it, the guy has this adventuresome streak that allows him to write songs like, "The Dance," a song that's so no wave you'd swear he was a long lost member of Suicide. Then as if to ram home the point that he's not a cursing one trick pony, he breaks out his inner Green Velvet and unleashes, "#1 Hit." It's fantastic stuff that guarantees that if the bass and rhymes don't get you on Everything Is Boring the hooks and diversity will.

Everything Is Boring is far from being boring. It's an edgy, nasty, challenging record that takes what made Miami famous and gives it all sorts of bad drugs and then lets it run rampant through NE 2nd Ave at 2am. Spank Rock has created a rough, raw and brilliant record that spurts out rhymes, blows out speakers, destroys synths, and obliterates dance floors. It's just about perfect and has essentially made me homesick. Awesome stuff.
Posted by Paul POP! at 3:50 PM