The Casio Kids Have Calculated Their Return 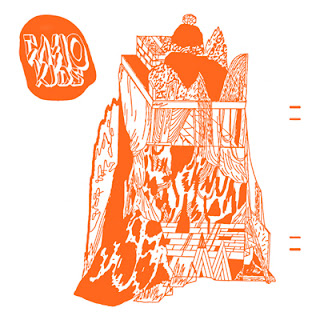 Norway's Casio Kids are not a group of calculator wielding nerds crossing the globe solving the worlds math problems. Nor are they pre-teens wielding keyboards playing Justin Bieber covers. No...This group of Norwegians plays extremely infectious, fun, uppity pop music that, in fact, uses the little keyboard that could. Rapidly gaining success and popularity in their native country and the rest of Europe, the band have found themselves primed to bring a Nordic invasion to our shores. Casio Kids latest album, Aabenbaringen over Aaskammen picks up where there last untranslatable album left off and should have even fewer problems winning over the indie masses who so easily fell for the likes of fellow countrymen Datarock and Annie.

Aabenbaringen over Aaskammen is once again, sung in the band's native tongue which might be a bit hard for us Yanks to sing along to, but thankfully their tunes are so infectious and musically easily to latch on that any communication gap is soon easily overcome. Combining some sort of chillwave with indie pop and synthpop the band have this incessant need to move and they do so throughout this record. While perhaps a bit more subdued then their last release, Aabenbaringen over Aaskammen is still a dance floor motivator and at times sounds like Norwegian Tahiti 80 or Figurine lost in a daze.

Perhaps a bit more experimental and less straight forward then previous releases, Casiokids seem to be intrigued by the music they make and want to change the way they do things. While this might sound like a bad idea, you'll barely take notice as the band's Norwegian pop hooks still manage to envelope you and smother you with fun. Aabenbaringen over Aaskammen is a chipper, moderately paced record that sounds incredibly happy and it's easy to enjoy no matter what language it's in.

As winter approaches and the days grow shorter this is the kind of record that we should all be listening to. Casio Kids have created an electronic, Afrobeat, indie, Norwegian, indie pop monster here that's so unashamedly up for it that it's bursting.
Posted by Paul POP! at 4:36 PM