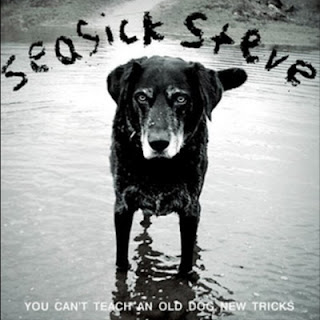 Like Tom Waits, the story of Seasick Steve is a story of survival, just getting by and then having success later in life. At nearly sixty seven, Seasick Steve has just about seen and done it all from running away from home, to busking, to becoming one of the biggest draws in the United Kingdom. He's a simple man with simple pleasures and his songs are so incredibly simple that the word complicated doesn't even exist in his vocabulary.

Steve's latest album, You Can't Teach An Old Dog New Tricks is a knock down drag out blues record that alternates between electric and acoustic sounds and includes enough twangy guitar, banjo, and bashed drums to make to make even Seasick Steve sick. This is a record that's rawer then sushi, rougher than roughage, and so no frills it's barely there. Recorded the old fashion way without digital assistance, You Can't Teach An Old Dog New Tricks, sounds like a record from another time and it's easy to see in this age how this simplistic and honest approach has it's appeal.

Far more coherent than ever, you can't help but wonder if Seasick Steve has been on the wagon for the last couple of years. You Can't Teach An Old Dog New Tricks is by far the most polished of his records and actually sounds like proper rockin' blues music. It seems as if Steve has cleaned up his act, toughened his chops, and written an exceptional set of songs that are leaps and bounds ahead of his previous efforts. While his last album took some effort to get into, this one was so easy to latch onto I half wonder if I don't have the blues.

Love him or hate him, you have to hand it to Seasick Steve. Perseverance and a love of his craft has paid off tenfold for this old guy and I have to say, he's lived one heck of a life that's probably been more exciting and depressing than any of us will ever experience. This is one senior citizen who's still got it and he's only to proud to show it off. I totally respect him for getting out there, touring the world, and making a living playing his songs at the young age of 67. More power to him!
Posted by Paul POP! at 5:17 PM