Field Music Line Up and Plumb The Line 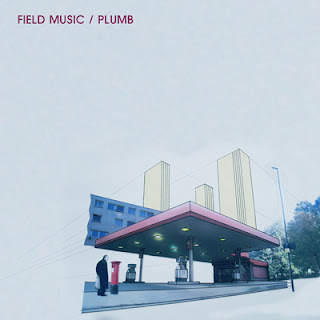 Sunderland's wunderkinds Field Music have been busy over the last year. Since 2011 they've been working on their new album Plumb as well constructing their new studio in which they eventually recorded said album in. So between construction projects and writing songs the band found themselves heading back to a more angular, quirky and odd timed style of play. Plumb will remind long time listeners of their first couple of albums as opposed to the sprawling Measure that opened things wide up for Field Music.

While Plumb harks back to Field Music's classic sound the band filtered these songs through the influence of 20th century film music (not field music) and allowed their songs to be shaped by it. The results are strange off kilter tunes that touch on Bowie like sounds while maintaining a post-post punk yet orchestrated approach. It's all right angles, questionable synth stabs, half attempts at string arrangements and rhythms that even Neal Peart would find unusual. This is pop music if it was processed through analog calculators from the 70's and it's rather entertaining.

Guitars ricochet off synths and beats stumble their way along as Plumb tries to maintain a controlled version of musical chaos. Not a lot of what they're doing here makes sense in a pop way, and in fact it would be most difficult to find a hit single on this record. For every moment of clarity there are three obtuse ones and Plumb is anything but catchy. Yet it's that strange approach and it’s skittering around pop music that makes this record so good. Field Music have clearly set off on a path that's all their own and whether it's sprawling songs or Plumb's mathematical equations set to music following them down that path is sure to be a worthwhile and intelligent venture.
Posted by Paul POP! at 5:28 PM