The D.A. and You Kids 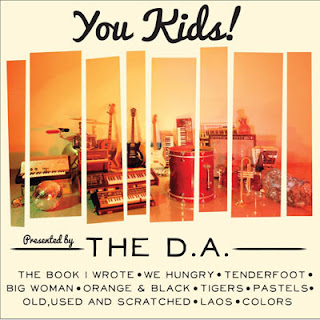 Whether or not El Paso band The D.A. are actually made up of district attorneys is up to some conjecture. What is known is that this group has been around Texas for the last four years and has slowly been building a solid audience and setting dance floors alight down there. After releasing an EP in 2009, the band headed back to the studio to begin work on their album. That’s essentially where they’ve been until now. You Kids! is the result of those efforts and it's a doozy.

You Kids! is a punk funk danceable delight that would sit perfectly next to The Rapture, Radio 4, and maybe even Vampire Weekend on a good day. Angular guitars, rolling drums, textured synths, groovy bass lines, jazzy horns, and obtuse vocals steer the band across the dance floor in all sorts of awkward directions. Energetic to say the least, the band contort their songs to slightly weird movements and arrangements and instrumentation all in the hopes of generating some energy in return. You Kids! does just that; it's youthful exasperation and wry sense of humor help seal the deal by forcing you to remember the words and angles The D.A. use.

The D.A. is a propulsive band and they drive that home with The Kids! Filled with dynamic and animated songs, this is a record that doesn't know how to slow down. Designed to make you move, The Kids! is exhausting to listen to in all the best ways, this is one album that's best handled in small doses unless you can keep up. They may not be lawyers or even know what D.A. stands for but The D.A. has clearly laid down the law here and it's fantastic.
Posted by Paul POP! at 2:27 PM

Email ThisBlogThis!Share to TwitterShare to FacebookShare to Pinterest
Labels: the d.a.