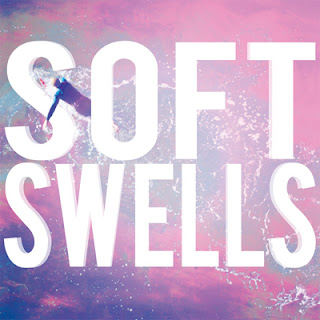 Apparently inspired by the beachy environment of Soft Swells surroundings, the band is the coming together of east and west coast sounds. Founding member Tim Williams put the band together with Phonograph mainstay, Matt Welsh which kind of makes them a super group. Both members have had successful careers outside of Soft Swells, so this band feels like a meeting of the minds and the ideal place to collaborate on musical ideas that they share. Their self-titled debut album was recorded across the pond in Lewes UK and was produced by Dave Lynch...not that one.

Sounding like a byproduct of more recent Modest Mouse albums and Clap Your Hands & Say Yeah, Soft Swells come off like a Great Northwest indie rock band. That's kind of amazing when you consider they're from a coastal California community and originally came from Brooklyn. Anyway, Soft Swells is an excellent album of dramatic indie rock that's sweeping, soaring, and filled with songs that hinge on Tim's inflective vocals. Utilizing a toolbox of sounds, the band mixes pianos, xylophones, multipart harmonies, jangly guitars and that voice to create the world in which their music swells a bit more than softly. Soft Swells songs will echo and reverberate around your head long after they've gone simply because the experience of Tim and Matt allow them to create hypnotic songs that keep you riveted.

A tidal wave of sounds with crescendos of drama and emotion, Soft Swells are a band that will sweep you off your feet. Dynamic, melodic, and structurally sound, Soft Swells is a classic album in the making and shows that this is one collaboration that is greater than the sum of its parts. If you've ever dabbled in that Northwest indie rock sound, you'll find Soft Swells and essential purchase and if you haven't what a better time to catch the wave. Order the album HERE
Posted by Paul POP! at 6:36 PM