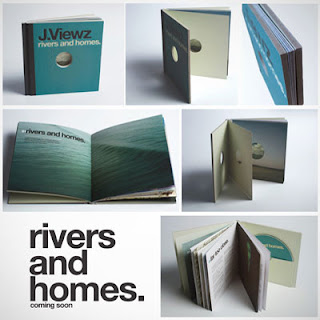 I'm not sure who J. Viewz is, but I will say he is a creative genius. His new album Rivers and Homes is a beautifully designed well crafted album that almost looks like a photography book that just happens to have a CD with it. It's a fine example of why actual CD's and records will ALWAYS be far superior to MP3's.

As for the album Rivers and Homes it resides somewhere between chill out, chill wave, trip hop, and house. It's a lush, extravagant record that seems to play well alongside the impressively designed packaging. So in a sense Rivers and Homes is really a complete package of visual and aural delights which only makes the experience that richer. As for the songs themselves, Rivers and Homes features orchestrated electronics that cascade over chilled beats and seductive vocals in such an opulent way that it's as if they shimmer while they come out of speakers. This is the soundtrack to sunrises and sunsets, to falling in love and hearts breaking, the beginning and the end. In a word, it's magnificent.

J. Viewz clever mixture of modern electronic sounds with "older," ones is genius. They so seamlessly blend chill wave into old fashioned trip hop vibes that it's almost as if they were one and the same. And well...maybe they are; with the way that the album is arranged and the fact that it's so sensuous the album lends itself to being the perfect vessel for such cross pollination.

Luxuriant and chilled to perfection Rivers and Homes is an absolutely brilliant album that takes every aspect of putting together an album and ties it all into a neat package. From the incredible graphic design, to the dazzling songs everything about J.Views Rivers and Homes is just about perfect. If there's one chill out, downtempo, whatever album you buy this year it should be this one.
Posted by Paul POP! at 5:44 PM