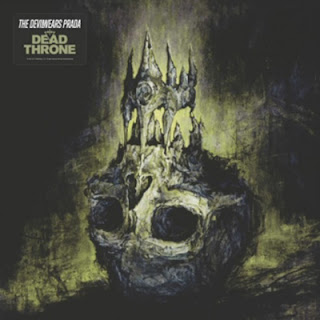 Holy Lord Jesus...Devil Wears Prada have just crushed me with their new album Dead Throne. Having just spent several hours with this thing, I've lost all feeling in my extremities and am now worrying about my health. If by some chance you spend several hours with this album on repeat and you survive the brutality that is inherit within this record, you'll probably be wishing you hadn't. Like a tactical nuclear attack on your ears, Dead Throne is a screamo, death thrash cross over with lethal potential. This is a band and an album so powerful that the riffs and screams that power it nearly leap out of the speakers and strangle you...it's sick.

Dead Throne is an album that is so overpowering, so destructive, and so chaotic that any attempt to control it is a lesson in futility. Even when the band go all melodic and emo on you the band's crushing riffage just plows through everything leaving a wake of withered remains. From guitar wipe outs, all kinds of gruff vocalizations, hammered drums, melodic bits, it's all here. While I much prefer the deathy end of the vocal spectrum, the melodic breaks provide mere seconds of respite before the horror continues. This is the sound of pain and it's amazing.

Devil Wears Prada have created a masterpiece of terror with Dead Throne. While not a metal album in the traditional sense that it's straight death metal or thrash, the band's varying degrees of monstrous power more than makes up for it. Dead Throne is an impressively played and impressively put together album that proves DWP deserve to be at the upper echelon of commercially viable bone crunching music.
Posted by Paul POP! at 5:13 PM