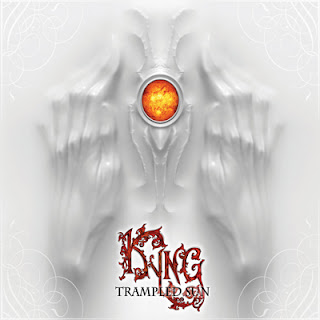 Kyng is a southern California hard rock band who sound like they belong more up north in Washington state than Los Angeles. This three piece band, define what it means to be a power trio by sounding something like a minimal version of Soundgarden, Queens of the Stone Age, and Sabbath. Their debut album, Trampled Sun even has Soundgarden-ish overtones to it and one can't help but wonder if they were trapped within a black hole when they recorded this record.

Anyway, Soundgarden comparisons aside, Kyng stack the riffs on Trampled Sun on top of each other and the power chord riffage volume is so high that you can almost see lightning bolts flying out your speakers. This is one heck of a crunchy, grindy, metallic rock and roll album that sounds like the best post-grunge, post metal, post apocalyptic album you will ever hear. This is an absolute riff fest here, and there's so much crunch, pseudo blast beats, and epic wailing going on that glass and concrete might just shatter. This is the definition of a vulgar display of power and it's amazing.

Trampled Sun is modern metal done right and while there can be no doubt that Eddie Veliz has been so influenced by Chris Cornell he might actually be him, the rest of the band turns on the Sabbath Doom o' Meter and creates songs that sound like a fleet of bulldozers heading for your house at four miles and hour; slow, heavy, and filled with enough power to level everything in sight. Kyng are very good at what they do and never lose sight of the fact that 1) power chords are something to worship and 2) that having actual songs are just as important as crunchy, tasty, metallic riffs. You can hear that all through Trampled Sun; this album is amazingly churny, heavy, and destructive but at the same time melodic, catchy, and great.

Judging by Kyng's debut this is a band that's destined to go far. Trampled Sun is a rifftastic post grunge masterpiece that combines the best of Seattle with the best of classic metal. How can they fail? And well, if they do there's always the Soundgarden tribute band circuit which I'm pretty sure they would kill at.
Posted by Paul POP! at 4:40 PM

Email ThisBlogThis!Share to TwitterShare to FacebookShare to Pinterest
Labels: kyng