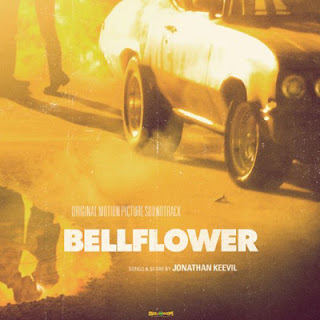 The original motion soundtrack to the film Bellflower isn't at all what I expected. Composed and scored by Jonathan Keevil, the album is a slow moving walk through a folk wonderland and not an ambient one. A strange choice for music when you know that the film centers around a friendship whose characters shift from building V8 Interceptors similar to Mad Max's to a destructive journey of love. While I’ve not seen the actual film quiet introspective music seemingly wouldn’t work for this kind of movie.

But here Keevil is crafting bedroom recordings, lo-fi songs, moany folk and things that just sound so depressing it'll make you cry. This is one soundtrack that's almost too sad and to lo-fi for it's own good. Apparently the songs came from Keevil's personal stash of songs recorded on Garageband during the editing process. You can tell this because so many of the songs sound like they were recorded poorly, cheaply and intimately in a side room somewhere. Put it this way, the songs are so lo-fi that you almost expect to hear dogs barking in the background.

While I'm most definitely intrigued by the film...it just sounds cool. The soundtrack is difficult for me to listen to. I, as you know, can't stand acoustic music and this is nothing but. This is one soundtrack that's a bit much and a bit too sad to listen to...even if the movie offers no glimmer of hope for the characters one would hope that these songs would.
Posted by Paul POP! at 1:52 PM