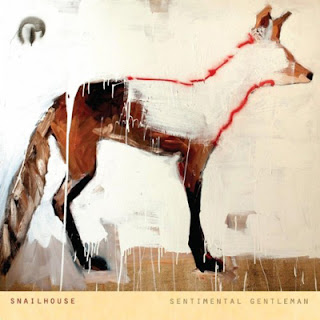 Snailhouse's Sentimental Gentleman seems like an appropriately titled album. This rustic, twangy, countrified version of something like Tindersticks takes Americana and leaves it out in the dusty plains of the Midwest. It's a heartbreaking, minimal affair that's the sound of sadness, suffering, and depression. Of course these guys could be singing about happy thoughts, the loves of their lives, and winning a million dollars, but it's framed within such depressing Americana that you can't help but reach for a Lexapro while listening to it.

With twangy guitars, vocals that sound like they're on their last leg, and songs that seem like ending it all might be a better option then listening to this whole album, Snailhouse crawl along at a pace that's slightly slower than paint drying. Put it this way, this is sad core if it were sleeping with Americana and having illegitimate children. For the most part Sentimental Gentleman is so sentimental sounding and so introspective feeling it's almost difficult to listen to. I already dislike Americana and the like...but to make it sound like it does just hurts me.

Musically, these guys are intriguing, I do enjoy their occasional dips into atmospherics and it has to be said that Snailhouse create an environment that's all their own. Unfortunately, that environment isn't the most inviting one in the world. With the winter here and Christmas over it's only a matter of time before seasonal affective disorder kicks in and listening to something like this (despite them telling you to take lemons and start a lemonade stand) might just push you over. If you are, however, super happy and you show it...then have at it...these guys write rustic minimal Americana that's thought provoking and introspective.
Posted by Paul POP! at 5:31 PM

Email ThisBlogThis!Share to TwitterShare to FacebookShare to Pinterest
Labels: snailhouse