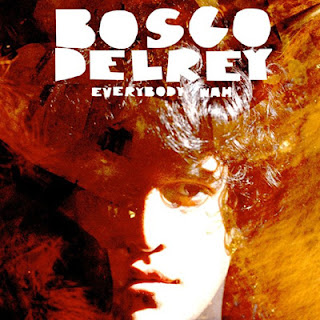 Should electro and rockabilly ever mingle together? Most people would probably say no. They are two forms of music that in a sense are diametrically opposed to one another. It's like the rockers vs. the mods...they just don't get along. Well someone sure didn't tell Bosco Delrey that because this New Jersey via Memphis musician has taken fist pumping and twang and mixed them into a strange brew of groovy chilled out goodness.

With doo wop influences, ambient sounds, chilled grooves, and a keen pop sensibility about him, Bosco Delrey has constructed one heck of a record with Everybody Wah. Sounding like something out of a David Lynchian dream Everybody Wah is a bewitching effort that shouldn't work in any way shape or form but does. Unafraid to throw anything into the already confusing mix Bosco Delrey even finds room to add a bit of dancehall and drum and bass. If you were to look up the phrase, “all over the map," you would see a picture of Bosco standing next to its definition.

Everybody Wah is confusingly good and constantly throws musical left hooks throughout the duration of its songs. Just when you think you've settled into a groove, out comes some drum and bass . When that's settled down here comes the doo wop. It's awesome stuff whose songs act like a genre scouting roadmap through the pop music lexicon. Influenced by everything and refusing to be cliché Bosco Delrey and Everybody Wah is a giant gumbo of musical ideas that come together in fine fashion. This is what being open minded is all about and I love it.
Posted by Paul POP! at 10:47 AM