Clawing With Their Hands & Teeth 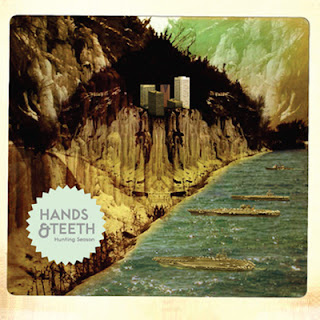 Toronto's Hand's and Teeth aren't scraping by using those human instruments but rather instruments of the musical kind. Two years in the making their debut album, Hunting Season is a reflection of the hard work and years of live playing that the band have put in since their debut EP was released in 2010. Now honed to a sharp point, their sound is a refined form of boy-girl indie pop with a dash of 90's indie rock thrown in for good measure.

Complete with soaring harmonies, jangly guitars, and bit of 90's alternative faves Tribe flowing through them the band have created a series of powerful songs that are a throwback to the golden age of alternative music. It's art pop with a post-modern flair that's a reflection of not only their influences but their combined energies. Hand's and Teeth approach is the result of each member coming from other bands and projects and together all these ex-band members have fused together their influences and ideas into one ethereal dreamy indie band that's easily far greater than all their other efforts combined. Call it serendipity, fate, or one heck of a coordinated effort to get together but Hand's and Teeth have set the past beside them and created on heck of band that’s got its future lying in front of it.

Hunting Season is a well produced, well written, clever record that mixes boy-girl melodies, chunky and jangly guitars, angular drums and ethereal atmospherics to get heavenly results. Hand's and Teeth are adept, skilled, and shrewd when it comes to writing and you can hear this throughout the album. Hunting Season is a great record that rises and falls on the melodies and angularities the band employs. Thankfully they're plentiful and hit in all the right places. While maybe not instantly graspable, once Hand's and Teeth latch on it's open season on your ears...Hunting Season or not.
Posted by Paul POP! at 2:32 PM

Email ThisBlogThis!Share to TwitterShare to FacebookShare to Pinterest
Labels: hands and teeth