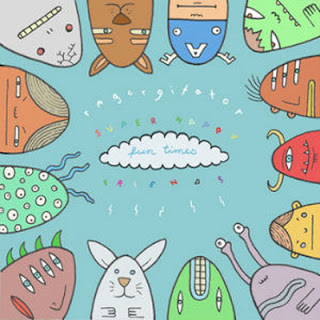 Regurgitator have been around for a very long time. So long in fact, I lost track of them sometime around 1998. But here they are thirteen years later after I first ran into them and they're still making music. Their latest album, Superhappyfuntimesfriends regurgitates so many different genre's of music you need a check list to keep track of everything that's going on.

From rock, indie, dance, and hip hop they're all here and mixed up somehow someway into the songs that are on Superhappyfuntimesfriends. This album really shouldn't work because it has so much going on and is attempting to do just as much but yet it does form some sort of cohesive musical effort. I suppose having over a decade of writing experience kind of allows you to know how to cross genre's, sounds, and ideas to make them work. Superhappyfuntimesfriends as a result of all this cross pollination is a roller-coaster ride that loves to go all over the place with tongue planted firmly in cheek.

Just listen to, "All Fake Everything," and you'll see what I'm talking about. The song starts out as a hilarious piano ballad about rappers and then explodes into some sort of nu-metal rap song that pokes fun at everything. This song is 4 minutes 25 seconds of absolute genius and shows that if you're going to name your band Regurgitator you better have a sense of humor about things and take it all with a grain of salt.

Superhappyfuntimesfriends is a funtastic album that in less than 35 minutes crams more music in the span of fourteen songs then most bands do in two albums. These guys have been around for as long as they have for a reason...they can write songs and do it with a sense of humor. Regurgitator are the kind of band you have to like because they'll make you laugh as much as they'll make you sing along and that kind of escapism is what music, or should I say Superhappyfuntimesfriends, is all about.
Posted by Paul POP! at 4:04 PM

Email ThisBlogThis!Share to TwitterShare to FacebookShare to Pinterest
Labels: regurgitator