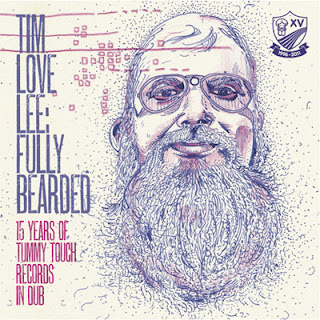 Tim Love Lee is a legend, Tummy Touch Records is legendary. So what happens when the two get together for the Tummy Touch Records 15th Anniversary? An album of such legendary proportions that it could only be done in dub and be called Fully Bearded. Comprised of twelve tracks, this anniversary album takes you on a wild ride through the Tummy Touch catalog and then keep things in echoy dubbed out perfection courtesy of Mr. Lee.

While far from a traditional dub album, Fully Bearded has enough reverb and echo to last a life time...just in a modern sense. Featuring tracks from everyone from New Young Pony Club, Tom Vek, Groove Armada, Circuits, and your mom this is a all killer no filler kind of affair where every track is better than the last. This of course leads to possibility of your brain exploding at the sheer quality of the twelve tracks here...and well...if your brain doesn't get you, your feet will, as this is a record of non-stop dubbed out dance grooves.

Tim Love Lee has been around for so long and you'll hear why as you listen to this record. His attention to detail and his remixing talents by restructuring entire tunes while keeping them familiar is remarkable and has made him a remix force. The guy can slice, dice, process, and then re-produce tracks and make hits even bigger hits with ease. He defines the word epic in his work and remixes.

With Lee at the helm and Tummy Touch packed to the rafters with hits there's really no way that Fully Bearded could fail. Awesome from the get go, this album makes a statement about longevity; if you've got the talent you'll last and that's exactly what TT and TLL have...talent. Pretty much essential, Fully Bearded is a dubbed out trip into amazingness.
Posted by Paul POP! at 6:32 PM